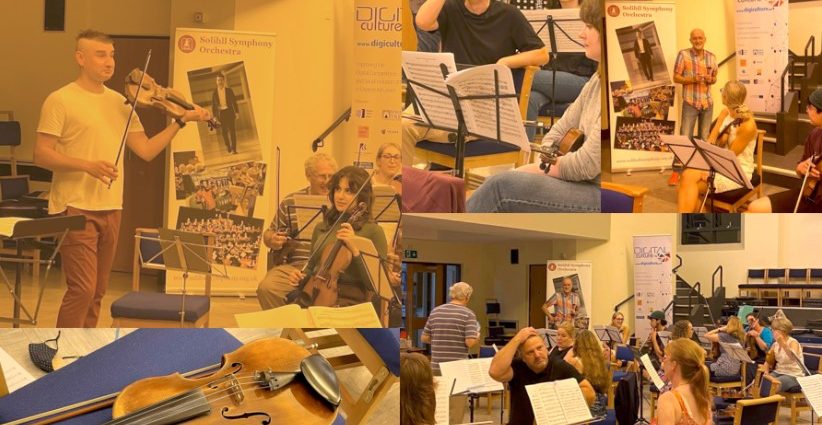 A DigiCulture Multiplier Event specifically on digital tools and music was held at Shirley Methodist Church in Solihull on 27 July 2021. Participants were members of several orchestras from the Birmingham area who joined with Solihull Symphony Orchestra for a play day and a seminar on DigiCulture.

Approximately 50 participants took part in the play day, and 15 later joined the DigiCulture seminar. Participants were predominantly female (65%) and had varied levels of experience in working with digital technologies. With the exception of the conductor and leader of the orchestra, they were all amateur musicians, although some worked in fields such as graphic design, event management, arts promtion, education and dance. The average age was around 40, although the oldest was nearly 80.

David Evans (JMEA), who is a member of Solihull Symphony Orchestra outlined the project, with particular emphasis on its relevance to music and musicians. Participants were invited to explore open source digital applications for creating, mixing, performing and recording music. Most members of the group used mobile devices (phones and tablets) to explore and compare the particular apps. Those that were most widely used included Musescore, Audacity and GarageBand. Although several participants had access to paid-for versions of software, many said that they preferred to use open source alternatives – for example, Audacity over Adobe Audition.

A few participants who had already taken part in DigiCulture activities – for example in interviews or survey research at the start of the project. Having seen the final versions of course modules, participants felt that those on Digital Audiences, Digital Safety and Security, Digital Publications and Social Media were likely to be the most useful to musicians. Some of the others were felt to be at too introductory a level, aimed at a specialist audience (for example, museum workers), or too technical for their present needs (for example, augmented reality).

Overall, participants were interested in the work of the DigiCulture project, and several indicated that they would enrol and follow some of the modules.

This site uses Akismet to reduce spam. Learn how your comment data is processed.

📢 We announce with great pleasure that the #DigiCulture project has been chosen as a Good Practice Example 👏 for adult education 👉 in the Erasmus+ EU programme. 📑 Outcomes include the DSC #MOOC, with 13 modules available in 7 languages, accessible online 🖥 and through blended learning, the Integrated Virtual Learning Hub including 🆕 #OERs, reachable to people with limited #digitalskills, and validation ✅ through e-assessment leading to #OpenBadges and Digital Certificates for 🌐 Digital Skills. 🖱 to see more about this on the DigiCulture website 🔛 digiculture.eu/en/the-digiculture-project-good-practice-example-in-erasmus-european-commission-pr... ℹ All DigiCulture tools, courses, resources, and materials are under 💯 Creative Commons Licenses and available online ❗ ... See MoreSee Less